Ealing Studios is best known for the comedies made at its London facilities in the aftermath of World War II. The cycle began with Hue and Cry (1947), which celebrates the street culture of unsupervised children playing in bombed-out buildings, and it continued for a decade. Many of these movies combined a cozy community spirit with bitingly anti-authoritarian satire; they are films about people who trust their neighbors and family but are ready to revolt against any larger institution that starts encroaching on their lives. In Passport to Pimlico (1949), a London neighborhood discovers that it is technically an independent enclave and thus is free of rationing and other restrictions. In Whisky Galore! (1949), a Scottish village conceals a freighter’s worth of whiskey from the Home Guard. In The Man in the White Suit (1951), corporate and union bureaucrats unite to suppress a useful invention because it threatens their bottom line. When you hear the phrase “Ealing comedy,” these are the sorts of stories the speaker means.

But the spirit behind these motion pictures wasn’t limited to Ealing. Elsewhere in England, other filmmakers were drinking from the same well; their movies may not have been as good as the best Ealing efforts, but they were still entertaining, and they had the same political edge. Here are two of them.

First up is Green Grow the Rushes (1951), based on a novel by Howard Clewes, directed by Derek Twist and written by Twist and Clewes. Like Passport to Pimlico, this features a semi-independent enclave (“Unfortunately, Fitchwick, these marsh people refuse to recognize any authority—they claim to have some ridiculous charter from some old king granting them independence”); like Whiskey Galore!, it culminates with a village conspiring to conceal contraband liquor from the government. If James C. Scott had written light comedies instead of political treatises, he might have made a movie like this. My favorite line comes at the end, when an official harrumphs: “These people don’t deserve to be governed!”

The second half of our double feature is The Happy Family (1952), based on a play by Michael Clayton Hutton; it was scripted by Muriel and Sydney Box, with Muriel doubling as director and Sydney as producer. In this one, the authorities plan to demolish a family’s home and shop so the government can build an entrance to the upcoming Festival of Britain. The family responds by barricading the property and hurling canned goods at the invaders. (Aficionados of transpartisan politics will appreciate the anti-statist alliance between the old-fashioned dad and his daughter’s rabble-rousing radical fiancé.) 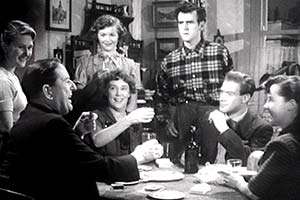 It isn’t a flawless picture—the sudden resolution feels a bit anticlimactic—but it’s a solidly good one; I can’t embed it in this post, but you can watch it here. If the movie has a manifesto moment, it’s the line right before the 46-minute mark, when Stanley Holloway’s character offers a toast “to living quietly and being left alone, and not being led about like sheep.”

(For past editions of the Friday A/V Club, go here. Mark Doyle has described The Happy Family as a precursor to Muswell Hillbillies, the Kinks’ concept album on the evils of eminent domain; to read my appreciation of that record, go here.)