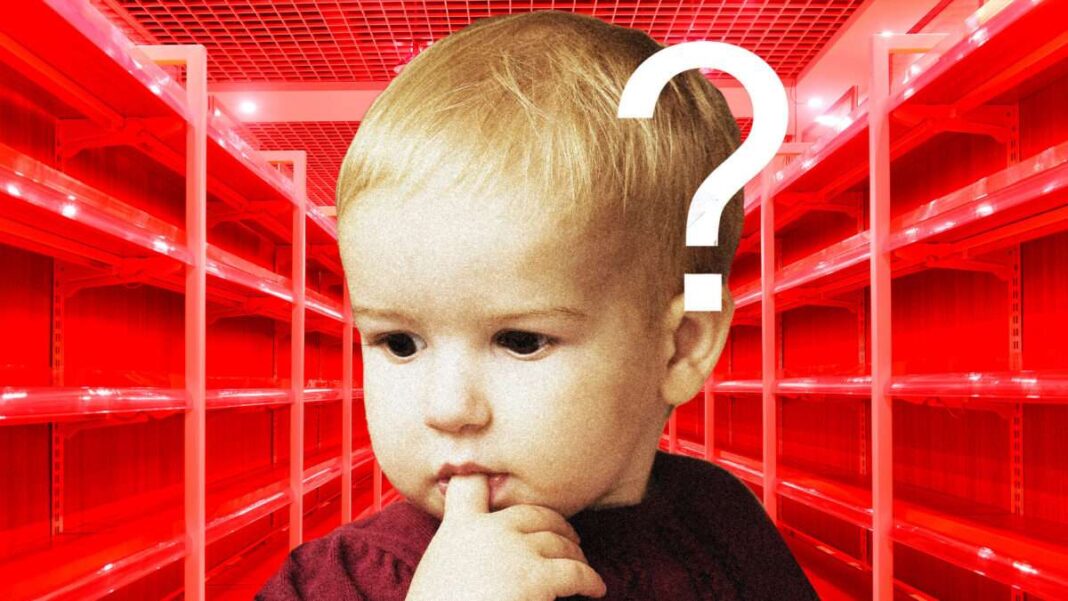 President Joe Biden has invoked the Defense Production Act and ordered the U.S. military to fly pallets of baby formula into the country from Europe.

But if the federal government just backed off and let the market function like it’s supposed to, we wouldn’t need military intervention or emergency policies designed for war to stock grocery store shelves with baby formula. This crisis is largely the result of protectionism, regulation, and central planning of the sort that both Democrats and Republicans want more of in Washington.

Reporters like CNN’s Jake Tapper have been pressing officials to explain why the government didn’t respond more quickly to this shortage—but the actual solution is for the government to be less involved entirely.

A better question is why didn’t the Biden administration clear the way for the private sector to react to price signals, like it does in every other industry? Food suppliers would have started stockpiling European-made formulas months ago if only U.S. tariffs and regulations weren’t an obstacle.

So how does this work in practice? First, the federal government prohibits importing many European-made baby formulas simply because they fail to meet the Food and Drug Administration’s (FDA) labeling requirements.

But Europe is the world’s leading exporter of baby formula, thanks to major producers based in Germany, the Netherlands, and Britain. If the FDA’s labeling regulations are so necessary, why is it that infants all over the globe safely consume formula made in Europe? Meanwhile, about 98 percent of the formula sold in the U.S. is produced domestically. We’ve sealed ourselves off from a robust, and safe, global market.

In addition to the labeling requirements, the government imposes huge tariffs on foreign-made formula to protect domestic manufacturers and the American dairy industry.

Now the U.S. is heroically flying in European-made baby formula. But just a year ago, customs officials were bragging about heroically seizing it at a port of entry.

These two policies of regulation and protectionism work in tandem to scare aware foreign suppliers. For example, let’s say you’re running a baby formula manufacturing firm in Germany. You would have zero incentive to spend the money to earn FDA approval for your labels because high tariffs would make your product too expensive to compete in the U.S. market.

Brian Deese, director of the National Economic Council, says the White House has acted quickly to “waive a whole bunch of regulations that traditionally make sense, but don’t make sense in this crisis.”

“Don’t make sense in this crisis?” Wait a minute. Did European-made baby formula suddenly become less hazardous? Does passing formula through the hands of the U.S. military magically makes it safe for American babies to drink? Or maybe the regulations and tariffs are designed to protect big businesses, not babies, and never should have existed in the first place?

Sen. Mike Lee (R–Utah) introduced a bill that would temporarily waive the tariffs on baby formula and remove the FDA labeling regulations.

How about scrapping them altogether?

There’s an important lesson here for economic nationalists, who claim that international trade is a vulnerability. Excluding even more foreign-made products is “critical for our national security,” Sen. Josh Hawley (R–Mo.) argued in a New York Times op-ed last year. He has suggested tightening the “Made in America” rules that already govern federal procurement to include “the entire commercial market.”

If Hawley got his way, all industries could become just as vulnerable to supply shocks as baby formula. Will we one day have to replace our $2.5 trillion international shipping and logistics industry with emergency military aircraft crisscrossing the skies?

The Biden administration and Congress get to come off like heroes, rushing to feed American babies left to go hungry because of the supposed cruelty of the free market. But that’s all an act. Don’t be fooled about the real cause of this shortage.

Music Credits: “Game Over,” by 2050 via Artlist; “High On You Instrumental Version,” by Fvmeless via Artlist.