Next Tuesday, the House Intelligence Committee’s subcommittee will hold an open hearing regarding the Pentagon’s work on identifying and investigating unidentified aerial phenomena, or UAPs.

That’s before my time for anyone who is counting.

Why are there open hearings next week?

Thanks to a handful of members of Congress, the National Defense Authorization Act included requirements for the Pentagon to set up a dedicated office with regular reporting requirements to Congress on the UAP issue.

Congress was underwhelmed by the recent classified report from the Pentagon.

“This hearing is about examining steps that the Pentagon can take to reduce the stigma surrounding reporting by military pilots, and by civilian pilots.”

While I doubt next week we will learn that aliens have visited us and are forming an alliance with a group of powerful elite aiming to assist in the colonization (I may have binge-watched X-Files this week), I do think it is worth exploring what might happen if full disclosure ever happens.

One of the critical questions for the upcoming House UAP hearing is: ‘Do we have evidence of intelligently-controlled unknowns in orbit or in space?’ https://t.co/uQxkLGcGoB

RELATED: What Is The Pentagon Hiding About Its UFO Program? Even Congress Doesn’t Know

A History of Disclosure

Most people have never heard of Project BLUE BOOK, even with the popular yet embellished T.V. series starring Aidan Gillen.

The project was a classified Air Force program dedicated to studying what were then called unidentified flying objects. UFOs.

Of the 12,618 sightings recorded in Project BLUE BOOK, 701 remain unexplained.

But disclosure in our history hasn’t just entailed flying saucers. So for those of you who think alien invaders are too weird to discuss, let’s talk about the fact that we still don’t know where JFK’s brain is.

Yes, you read that right. JFK’s brain, or rather what was left of it, was removed and put into a jar for further study. The jar was sent to the National Archives, and then it disappeared.

Did they lose it? Was it stolen? For all things holy, how could such a thing possibly happen?

Another topic not covered by the mainstream media is that more disclosure of the infamous Kennedy files is scheduled for December of this year. Does anybody seem to care? Not really.

The Biden administration declassified a 16-page FBI report tying the 9/11 hijackers to Saudi nationals living in the United States.

One would’ve thought there would’ve been more public outrage given that one of the Saudis was a diplomat. And the fact that our country was at war in Afghanistan for so long, people who weren’t even alive on 9/11 ended up fighting there.

Where Does God fit In?

What strikes me as interesting is those who believe in God tend to be skeptics on the UFO question. Nonbelievers tend to look towards the stars and contemplate if they are alone. Perhaps we all have an innate desire to believe in something larger than ourselves, be it God or E.T.

No doubt, if it were announced that aliens exist, there would be aspects of religions that would struggle. For example, can you be a Muslim alien or a Jewish alien?

Pope Francis has already said he would baptize an extraterrestrial if they asked for it because, as he so plainly put it:

“Who are we to close doors?”

So I find it unlikely that the religious community would crumble. God is God on this planet and the next, I would imagine.

RELATED: The Truth May Very Well Be ‘Out There’

Who Will Be Rocked the Most: UFOlogists

I started to watch “Ancient Aliens” shortly after I joined the service. For various reasons, I struggle with falling asleep. “Ancient Aliens” is almost always on T.V., and I’d be guaranteed to be asleep at least at the halfway mark.

This isn’t to say that the episodes aren’t interesting. On the contrary, the concept of Ancient Astronaut Theorists and ufologists fascinate me just as much as the fact that anybody can become a Fellow of just about anything these days. (Like “disinformation.”)

However, the show that legitimized UFO investigation was “Unidentified: Inside America’s UFO Investigation.” Originally a show meant to shake up my usual evening sleep routine, I quickly became fascinated. The credible military personnel and pilot accounts were riveting.

What I found even more interesting than the scientific investigative nature of the show was that this endeavor was mainly due to former Blink-182 member Tom DeLonge.

All the Small Things

DeLonge and other members from the scientific, aerospace, engineering, military, and intelligence communities created To the Stars Academy of Arts & Sciences. On their website, it states To the Stars:

“Creates original content informed by our experiences working with prestigious government agencies and academic institutions; told across film, television, publishing and merchandise with the goal of turning the world on to new ideas and new possibilities.”

I don’t know how even a skeptic could contain feeling jacked after reading that statement.

What Will Disclosure Mean for Us?

If we find out that aliens exist and have visited us and continue to visit us, I don’t think it’ll be madness and mayhem in the streets. At least not any worse than we already see. I don’t even know if it’ll get that much media coverage.

Mainstream media still considers this a fringe topic full of outlandish claims made by people with unhealthy obsessions with Gillian Anderson. But disclosure would raise some interesting questions, including how we should deal with those who hid the truth and what we do with this newfound truth.

Ronald Reagan said at the United Nations in 1987:

“Perhaps we need some outside universal threat to make us realize this common bond. I occasionally think how quickly our differences worldwide would vanish if we were facing an alien threat from outside this world.”

I suppose the war in Ukraine would seem a bit insignificant with alien invaders in the mix. Congressman Carson said:

“This may be the very thing that brings Democrats and Republicans together, at least for an hour or two.”

That doesn’t sound so bad to me. So until next week, keep looking to the stars because the truth is out there, or at least a Tesla at the very least. 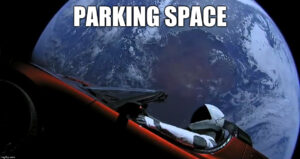