If Roe Gets Overruled, Abortion Policy may not be “Left to the States” 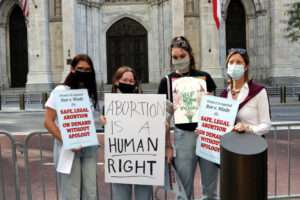 Last week’s oral argument in Dobbs v. Jackson Women’s Health Organization, showed there is a good chance that the Supreme Court will soon overrule, or at least severely limit abortion rights long protected under Roe v. Wade and subsequent precedents. If Roe does get overruled, many people assume that abortion policy will be “left to the states.” Some hope that, in that event, the temperature of the culture war over abortion might be lowered. Both red and blue state majorities could live under their preferred regimes. People who strongly oppose their state’s policies on the issue might be able to “vote with their feet” for alternatives, including by crossing state lines to get an abortion, and then returning home after it is done.

But that possibly happy scenario might well not occur. The reason is that the federal government could potentially get into the abortion regulation game. Current Supreme Court precedent leaves considerable potential scope for such regulation. That, precedent, in turn, could potentially be limited or even reversed, however. If so, abortion rights advocates might owe a debt to the unlikeliest of saviors: conservative Supreme Court Justice Clarence Thomas.

In the immediate aftermath of a reversal of Roe, the states really would be in control of developments. There is currently very little federal abortion legislation on the books. Red states could enact new restrictions and reactivate old ones blocked by Roe. Blue states could continue to permit abortion, and perhaps even expand its availability. Red-state residents seeking abortions would increasingly try to cross state lines to do so in more liberal states.

But this state of affairs could change if Congress decided to act. In my view, the text and original meaning of the Constitution do not give Congress any power to restrict abortion, with the exception of those performed in federal territories, such as the District of Columbia, and perhaps those that involve crossing state lines to access a commercial provider. But current Supreme Court precedent strongly suggests otherwise.

Under cases such as Gonzales v. Raich (2005), the Supreme Court has held that Congress’ power to regulate interstate commerce includes the authority to restrict almost any “economic activity,” so long as it has a “substantial effect” on interstate trade. And “economic activity” is defined very broadly to include anything that involves anything that involves the “production, distribution, and consumption of commodities.” That definition allowed the Court can use the Commerce Clause to uphold a federal ban on the possession of marijuana that had never crossed state lines or been sold in any market (even an intrastate one). Nearly all abortions involve the “consumption” and “distribution” of commodities, such as medical supplies. In addition, most abortions qualify as “economic” transactions because doctors, nurses, and others are paid to perform them.

One could argue that a federal law banning or severely restricting abortions isn’t “really” aimed at regulating interstate commerce. The true motive would be to restrict abortion regardless of whether it involved interstate transactions or not. But much the same can be said for the marijuana ban upheld in Raich, and other federal laws enforcing the War on Drugs. They go far beyond targeting actual interstate trade in drugs, and instead forbid even in-state distribution and possession of illegal narcotics.

If, as is likely, the interstate abortion market expands in the wake of a Supreme Court decision overruling Roe, Congress could claim that suppression of intrastate abortions is necessary in order to enforce restrictions on those that involve crossing state lines. If abortion is banned in State A, but legal in neighboring State B, that creates an incentive for residents of A to cross into B in order to get abortions – even if the feds enact a ban on such crossing. That ban might be more effectively enforced if abortion were illegal in B as well as A. Thus, Congress has the power to restrict abortion within a state, because doing so can help suppress the interstate market in abortion.

The Commerce Clause rationale for abortion restrictions might not apply to abortions that are performed on a noncommercial basis by staff who provide their services for free. But such cases are only a small percentage of the total. Moreover, in Raich, the Court upheld the ban on Angel Raich’s possession of marijuana even though the producers had in fact provided it to her for free. The theory was that even such completely noncommercial production and distribution of an illegal drug could impact the interstate market.

These kinds of commerce clause arguments may strike some readers as the kind of sophistry that gives lawyers a bad name. I sympathize with that reaction! I hate these arguments myself, and have long argued that Raich is a terrible decision that should be overruled. But this is exactly the sort of reasoning that prevailed in Raich, and provides a constitutional rationale for much of the federal War on Drugs.

In addition to trying to directly regulate abortion by using its Commerce Clause powers, Congress could also try to do so indirectly by using its Spending Clause power to condition grants to state governments. For example, it could enact legislation restricting various types of health care grants to state governments unless the latter ban or severely restrict abortion. These kinds of conditional spending restrictions are subject to a number of constraints under current Supreme Court precedent. The amount of money involved cannot be so large as to be “coercive”; the conditions must be sufficiently related to the purpose of the grant; and they have to be clearly stated on the face of the law – not just inferred by the executive branch. The Trump administration ran afoul of all three of these restrictions during its campaign to cut federal funds to “sanctuary cities.”

I won’t go through all of the potential arguments and counterarguments here. Much depends on the exact scope and wording of the legislation at issue. Nonetheless, I think a carefully drafted conditional-spending restriction on abortion rights could potentially jump through these hoops. Then, blue states would face a choice of either losing some of their federal health care grants or imposing abortion restrictions.

The Spending Clause approach is less threatening to abortion rights because states could potentially avoid the conditions by refusing the federal funds tied to them. In practice, such refusals of federal funds are very are. But a hot-button ideological issue like abortion might prove an exception to that rule. Some blue states, especially relatively wealthy ones,  might tell Uncle Sam to take his money – and his abortion restrictions – and shove them.

What applies to conservative efforts to use federal power to restrict abortion likely also covers liberal efforts to use it to protect abortion rights against red states. Congress could potentially use Commerce Clause reasoning to justify laws preempting state regulation of abortion. It could also potentially condition various federal grants to state governments on the abolition of state-level restrictions on abortion.

The above discussion is based on the assumption that current Supreme Court federalism precedent remains unaltered. But that might not happen.

In Gonzales v. Carhart (2007), the Supreme Court upheld a federal restriction on late-term “partial birth” against individual rights challenges. Justice Clarence Thomas wrote a concurring opinion emphasizing the possibility that the law in question exceeds the scope of congressional power under the Commerce Clause. Thomas previously wrote a forceful dissent in Gonzales v. Raich. Earlier this year, he reiterated key elements of his critique of that decision, and urged the Supreme Court to reconsider and limit it.

Back in 2018, I explained why Thomas’ position could well lead him to vote to strike down federal abortion restrictions. I built o an earlier post on this subject by Cornell Law Professor Michael Dorf. It’s possible that one or more other conservative justices could join Thomas’s reasoning. One can then envision federal abortion restrictions getting invalidated by a coalition of conservative justices who believe they are beyond the power of the federal government, and liberal justices who object on individual-rights grounds. It is also possible (though less likely) that some liberal jurists could endorse the federalism argument against these restrictions. Liberal thinking on constitutional federalism shifted a good deal in recent years, and some of that shift may go beyond “fair weather federalism” brought on by opposition to Trump’s policies. It’s also possible that either liberal or conservative judges will think of clever ways to limit the scope of Raich, even if it doesn’t get overruled completely.

But, as also explained in my 2018 post, abortion rights plaintiffs challenging federal restrictions will need to specifically raise the federalism issue if they hope to get Thomas’ vote. He has a strict policy of not considering constitutional arguments that aren’t specifically raised by litigants. Some conservative lower-court judges have similar views. More generally, abortion-rights advocates would need to make federalism issues a regular part of their armory, which might cut against the ideological grain. But immigration advocates have successfully made a similar shift in sanctuary cities cases, and there is no intrinsic reason why the pro-choice legal community cannot follow their example.

While the issue is a complex one, it’s also possible that abortion litigation could lead courts to tighten enforcement of constitutional constraints on conditional grants to state governments. I suggested some ways that could be done here.

Federalism arguments could also, of course, be raised by state governments and others challenging potential federal laws protecting abortion rights against the states. In considering their litigation strategy, conservatives and liberals alike may need to decide whether they care more about preserving the autonomy of “their” states, or about retaining the power to control the other side’s states when their preferred party is in power in Washington.

All of the above assumes the Supreme Court will indeed overrule or severely limit Roe v. Wade, and that Congress would take advantage of that shift to enact new abortion legislation. Neither outcome is certain, especially the latter. The Court might yet preserve most of Roe in some form. Even if it does not, federal abortion legislation might be forestalled by various political factors.

But the possibility of federal abortion legislation enacted in the wake of Roe’s overruling is at least a plausible one that deserves serious consideration. As a supporter of both abortion rights and tight limits on federal power, I hope that it leads Supreme Court justices and others to reconsider awful decisions such as Gonzales v. Raich, and at least limit their scope.