Monkeypox Cases Continue To Spread Across the U.S. as Three States Declare Emergencies 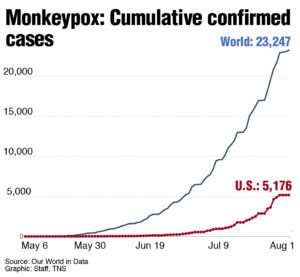 New York, Illinois, and California have all declared states of emergency over the continued spread of monkeypox among the populace, though it’s not entirely clear the extent these declarations will help given the current lack of access to vaccines.

Total monkeypox infections in the U.S. have climbed to more than 5,800 (the chart on the right is slightly off but shows the speed of transmission) and have now been detected in every state except for Montana and Wyoming. While those numbers are still very low given the total population of the U.S., there were just around 800 infections less than a month ago. Testing then was still very limited, so it’s possible that many of these new diagnoses were people who had already been infected but didn’t yet know.

So far, according to health officials, the spread still appears to remain among men who have sex with other men. In California, 98 percent of infections have been identified among these men, according to state officials. While monkeypox is not a sexually transmitted disease and can be spread through physical contact with the lesions and rashes associated with it (and through materials like clothing and bedding), the strain that has spread across Europe and into the U.S. appears, for now, resistant to spread through casual contact. Most of the infections are being spread through sexual partners.

Monkeypox is often painful, but the version spreading in the U.S. has not been fatal thus far. Two deaths in Spain and one in Brazil just recently announced are believed to be the first outside of Africa. The man who died in Brazil also reportedly had lymphoma and a weakened immune system.

Even if the U.S. can’t seem to contain the virus, the narrowness of the spread does make it more possible to identify communities where spread is likely and to target those at most risk. New York has seen the most infections, and California and Illinois both have significant populations of gay and bisexual men in the big cities. Health officials are attempting to prioritize vaccination for sexually active men in these high-risk categories.

California Gov. Gavin Newsom has been quick to use his broad emergency authorities during the COVID-19 pandemic to seize a lot of power for himself and control the entire state’s response. California law gives the governor extremely broad (arguably overly broad) powers in an emergency and allows him to redirect budgeted funding and simply tell state agencies what to do.

Newsom’s emergency orders here, though, are limited, probably because the slowness of the feds to get the vaccines out to the states has also limited what California can actually do in response to the spread. His orders give emergency medical services (EMS) personnel the power to administer monkeypox vaccinations that have been approved by the Food and Drug Administration and allow for the possibility of future loosening of the rules to let EMS workers help with the response. This means that there’s a greater pool of health workers who can help run clinics to administer monkeypox vaccines.

If only they had any. As coverage of these announcements note, the states are still struggling to get any doses of the vaccines at all. According to the Los Angeles Times, the City of Los Angeles got its own shipment of vaccines from the federal government (24,000 doses), and the rest of the state has gotten 61,000 doses. There are close to 40 million people in California, more than 1.8 million of them identifying as LGBT. If the sexes are split equally, that means about 900,000 gay and bisexual men, and that’s not even counting men who might quietly hook up with other men but don’t want to identify as gay or bisexual.

Reason and several other media outlets have made note of the foot-dragging and federal red tape that have kept more than 1 million doses of a monkeypox vaccine in Denmark rather than immediately being sent over to the U.S. to help fight the spread. Another treatment for monkeypox has been bogged down in federal paperwork because, while it’s approved for use to fight smallpox, it’s still in clinical trials for monkeypox.

The U.S. also has a large stockpile of a drug called ACAM2000, more than 100 million doses, intended for use to fight smallpox if needed. They can also likely serve to help prevent and treat monkeypox, but it’s not as simple as pulling them out of storage and handing them over to clinics. As Vox notes, ACAM2000 isn’t simply injected. It’s a complicated multijabbing process with an unusual needle that older folks who have been vaccinated for smallpox may remember (probably not very fondly). And it can cause serious side effects and reactions among those who are immunocompromised, like people with HIV. Given the amount of work that would be involved in training and prepping to administer ACAM2000, it’s not clear if it would be faster or more effective than getting the doses of Jynneos, the vaccines that are being transported over from Denmark.

In the end, it seems as though these emergency declarations are not attempts by governors to snatch more power and control like they were with COVID-19 but are more intended to apply political pressure to federal agencies like the U.S. Department of Health and Human Services (HHS) to get organized and start getting vaccines out to the states. HHS only gave states clearance last Friday to put in requests for 786,000 of the Jynneos doses they were transporting to the United States.