The documents were obtained by Senator Chuck Grassley, the ranking Republican on the Judiciary Committee, and reveal that James Biden’s company received payments from a Chinese-financed consulting group in 2018.

Grassley (R-IA) says the records indicate that, prior to Joe Biden launching his presidential campaign, James and Hunter received monthly retainers from the firm totaling $165,000 — $100,000 to Hunter and $65,000 to James.

“We have people with the Biden name, dealing with Chinese business people that have a relationship to the Communist Party,” Grassley told CBS News. “I think James Biden was very much a part of this.”

According to a Washington Post report last week, Hunter Biden was the beneficiary of millions of dollars in consulting fees from executives of a Chinese energy company – to the tune of nearly $5 million.

That ‘new’ news was derived from a sudden interest by the Post in the First Son’s laptop, originally reported on by the New York Post in October of 2020.

“Over the course of 14 months, the Chinese energy conglomerate and its executives paid $4.8 million to entities controlled by Hunter Biden and his uncle, according to government records, court documents and newly disclosed bank statements, as well as emails contained on a copy of a laptop hard drive that purportedly once belonged to Hunter Biden,” they wrote.

Hunter’s ties to the Chinese energy company, the Post explains, “illustrate the ways in which [President Biden’s] family profited from relationships built over Joe Biden’s decades in public service.”

“James Biden received $65k/mo from company connected to the Chinese govt, totaling $780k…Hunter received $100k/mo in addition to a $500k0 retainer…added up to $1.7 million…What exactly that was supposed to pay for isn’t clear.” https://t.co/9Y47qhqWwi

Grassley’s documents show that the family profits extended to his brother James as well as his wife.

A supplemental report produced by Grassley and Senate Homeland Security and Governmental Affairs Committee Chairman Ron Johnson (R-WI) in September of 2020 claimed documents contain evidence “that confirm the connections between the Biden family and the communist Chinese government.”

CBS News notes that the 2020 report alleged “Hunter, James, and James’s wife Sara tapped into a line of credit Hunter set up with a Chinese business executive to purchase more than $100,000 in airline tickets, hotels and restaurants. ”

In the new release from Republican investigators, CBS reports that records “show what appears to be the 2017 application for that $99,000 line of credit bearing the signatures of Hunter Biden and the Chinese executive.”

The records in question have ‘come directly from the banks,’ with ‘no third party’ involved. https://t.co/nfbJu4gCKU

Grassley tells CBS News that the new documents they’ve reviewed and released to the public were obtained “directly from the bank where the consulting group did business.”

In an alarming development, CBS reveals they had learned “more than 150 financial transactions involving either Hunter or James Biden’s global business affairs were flagged as concerning by U.S. banks for further review.”

The deep-dive by CBS is yet another in a handful of recent media reports seemingly confirming that a previous narrative that the Biden family’s business dealings were ‘Russian disinformation’ is false.

James Biden’s name surfaced in the days prior to the 2020 presidential election in a Fox News interview with Tony Bobulinski, a former business associate of Hunter Biden.

The revelations were dismissed via a mainstream and social media blackout.

Bobulinski claimed Joe Biden, despite repeated denials on the matter, discussed business dealings with his son and suggested the Democrat is also compromised by the Chinese Communist Party.

An email obtained by Fox News at the time appeared to outline a payout for Biden in a joint venture with CEFC China Energy.

Bobulinski, in an interview with Tucker Carlson, insisted the ‘big guy’ is a reference to Joe Biden, though that has not been confirmed elsewhere.

Bobulinski addressed concerns about what the Bidens were doing to James, who allegedly told him they have an out.

“I remember saying [to James], ‘How are you guys getting away with this?’ ‘Aren’t you concerned?’” he told Carlson.

Hunter Biden’s ex-business partner Tony Bobulinski: “I remember looking at Jim Biden and saying how are you guys getting away with this? Aren’t you concerned? He looked at me, and he laughed a little bit, and said ‘PLAUSIBLE DENIABILITY.’” pic.twitter.com/IxbND1IbWV

The deniability is growing less plausible by the day.

After allegedly meeting with Joe, his brother Jim Biden, and Hunter, to discuss their deal with communist China, Bobulinski texted Jim telling him to “thank Joe for his time.” 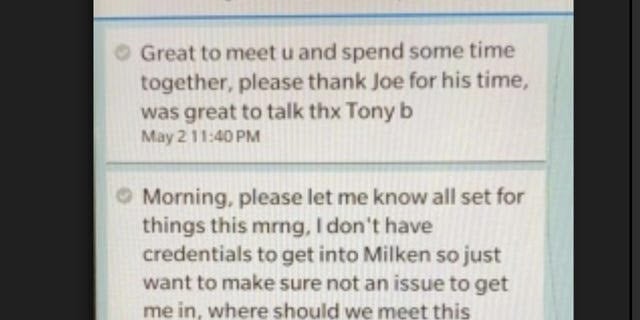 Robert Weissman, president of the consumer advocacy non-profit Public Citizen, says he thinks “Hunter and James Biden should not have entered into those relationships” with the Chinese firm.

“In the best case, those things look really bad,” he said. “In the worst case, the conflicts can be quite serious.”

Even with Biden out of office at the time, Weissman adds there should still have been concern about the potential for “investing in these family members to get future benefits in the possibility … that Joe Biden would become president later on.”