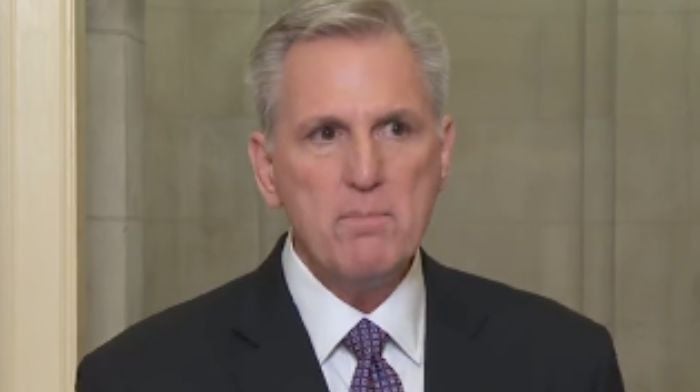 I’m sincerely hoping that you’ll hear this a lot out of me: Credit where it’s due!

I don’t trust Kevin McCarthy any farther than I can throw him, which is only about 7-8 yards since I am freakishly strong, but it’s important to not just attack politicians when they’re wrong, but to praise them when they’re right.

For some reason, famed economist James Buchanan gets plaudits for his Public Choice Theory, which essentially states that, like all people, politicians also pursue their self-interest. Common sense to most people, but nevertheless, important and largely ignored on the right.

If you want politicians to do what you want, you need both the carrot and the stick. Those of us with a little more mental firepower recognize this as operant conditioning.

At any rate, Speaker McCarthy deserves plaudits for not only giving Russiagate conspiracy theorists the boot from the House Intel Committee, but perhaps more importantly, for absolutely wrecking a goofball reporter who was trying to whine about it.

McCarthy Lets ‘Em Have It

Speaker McCarthy, thankfully, seems to have learned from the Trump playbook – which is to say, mainstream “journalists” are not reporters, but transparently stenographers for the DNC and Langley. They are not good-faith actors just looking out for the people.

Very, very much the opposite, I’m afraid.

To wit: in a showdown with a reporter, who of course tried to “whatabout” by asking about Republican George Santos, who appears to be even more impressive than Frank Abignale, Jr., McCarthy was asked:

You can see McCarthy just getting ready, answering that Santos was elected by his district, before getting cut off again.

That’s when the new Speaker jumped in: “Let me be very clear and respectful to you. You asked me a question. When I answer it, it’s the answer to your question. You don’t get to determine whether I answer your question or not, OK? In all respect. Thank you.”

Over the shouts of other reporters, McCarthy continued:

He continued, “When (former Rep.) Devin Nunes put out a memo, he said it was false. When we had a laptop (Hunter Biden’s laptop), he used it before an election to be politics and say that it was false, and said it was the Russians, when he knew different. When he knew the intel.”

“When you talk to John Ratcliffe, DNI, he came out ahead of time and said there’s no intel to prove that. And he (Schiff) used his position as Chairman, knowing he has information the rest of America does not, and lied to the American public,” McCarthy pointed out.

It only gets better from there. McCarthy also raised other crucial points, but you’ll have to watch since The Political Insider is a small, independent outlet and they don’t have staff available for translations.

Holy shit. Kevin McCarthy just absolutely destroyed a reporter who questioned his decision to remove Schiff and Swalwell from the intel committee.

Now as I mentioned earlier, McCarthy deserves praise for just nailing the fake news with both barrels. If you want him (and others) to continue this behavior, give them praise. Show them some positive reinforcement.

And don’t get me wrong, I’m a total cynic. I don’t believe for a second that McCarthy and his GOP are going to actually follow through on the more concrete promises. But that’s a time for another day.

On this day, I’m going to celebrate when a politician who isn’t named Donald Trump or Ron Paul actually does the right thing.

I suggest that you do the same. That is, if you want to see more of this.