Five states held primary elections on Tuesday: Idaho, Kentucky, North Carolina, Oregon, and Pennsylvania. One of the big questions going in was how Trump-endorsed candidates would fare (which many see as a proxy for measuring the former president’s influence within the party). The results on that front were a mixed bag.

For instance: Trump-endorsed candidate Tedd Budd—currently a congressman—won in the North Carolina Senate primary, beating out former North Carolina governor Pat McCrory. (“McCrory would seem to be a prototypical Trumpian Republican: As governor, he banned sanctuary cities, extended the waiting period for an abortion from one day to three, and required people to use the public bathroom that corresponded to their biological sex,” notes Reason‘s Joe Lancaster. So McCrory’s loss isn’t something for libertarians to lament. “But it is concerning when a candidate like McCrory, who made his name on culture war battles, is somehow not MAGA enough.”) And 26-year-old Bo Hines, whom Trump endorsed, won the Republican primary for North Carolina’s 13th District House seat.

But Trump also endorsed U.S. Rep. Madison Cawthorn (R–N.C.) in his bid for reelection. And Cawthorn—a scandal magnet—lost to state Sen. Chuck Edwards (R–Henderson County), whom NBC describes as “a conservative backed by many of the state’s establishment players.”

Idaho Lt. Gov. Janice McGeachin, who was endorsed by Trump and ran on a promise to challenge the 2020 election, lost badly to Gov. Brad Little, a more moderate Republican. “The race was called with 23% of precincts reporting and Little receiving 64.1% of the vote, while Lt. Gov Janice McGeachin had 23.4%,” reports the New York Post.

In Pennsylvania, the Senate faceoff between Trump-backed celebrity doc Mehmet Oz and hedge fund CEO David McCormick is still too close to call.

“Overall, it was a night that saw Trump’s hold on the GOP appear not quite so solid as previously thought,” suggests The Hill. But others say that even if not all of Trump’s picks win, the MAGA ethos is apparent in many of last night’s GOP winners whether or not Trump endorsed them.

The success/failure of Trump’s endorsed candidates is a poor litmus test of Trump’s influence within the Republican Party because almost all the GOP candidates are running on a Trump message/platform.

This is still Trump’s GOP whether his endorsed candidate win or not.

So far, Trumpism is having a better record than Trump himself tonight.

In other election news, Pennsylvania Lt. Gov. John Fetterman—a anti-establishment Democrat who has backed marijuana legalization (he sells campaign T-shirts with marijuana leaves on them) and criminal justice reform—won the Senate primary in his state. This means he’ll be racing off for a Senate seat against either Oz or McCormick.

And Kentucky Sen. Rand Paul—who can still be an important pro-liberty voice in Congress, even if his limited-government stances have been getting woefully selective—easily won the Republican primary. Paul will face off in the fall against former state Rep. Charles Booker.

Should people who pay for sex be punished? That’s what British activist and author Julie Bindel argued in a recent Soho Forum debate with me. I took the position that we should decriminalize both selling and paying for sexual activity. You can watch the whole debate here:

Another example of Facebook fact-checking gone awry. This time, the social media platform is obscuring a vintage recipe for homemade baby formula, labeling it false information because the recipe might not be up to today’s nutritional standards. 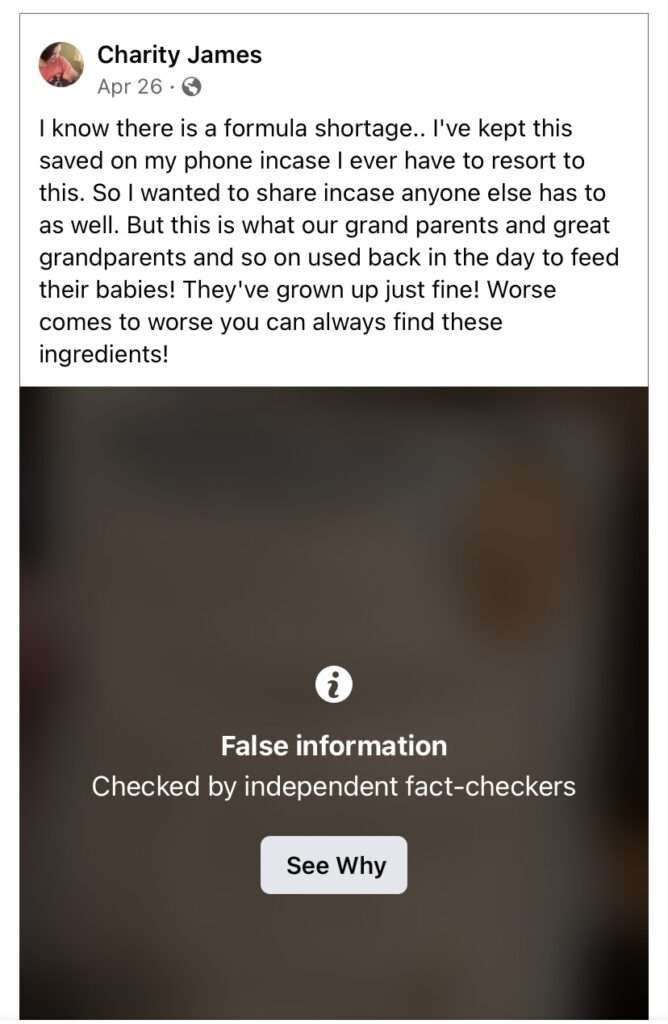 Various people have shared the picture purporting to be a recipe from 1960 for homemade baby formula, noting that it might be useful in light of the current U.S. baby formula shortage. Now those pictures have been hidden; in their place is a screen that says “False Information” and “Checked by independent fact checkers.” From there, users can choose to “see why” or “see photo.”

If the photo wasn’t really a vintage baby formula recipe, Facebook declaring this false information would be bizarre but at least in keeping with the general tenor of what a “fact check” is supposed to mean. But no, the reason given for the “false information” label is even more eyeroll-worthy. Facebook objects to the recipe—which calls for milk, water, and Karo syrup—because it’s not what doctors or government bodies today recommend.

Facebook’s explanation links to an article from The Healthy Indian Project, along with a statement from Facebook that “independent fact-checkers say that this information has no basis in fact.” The article doesn’t dispute that people made formula like this in 1960. Rather, it states that “Karo syrup is a debated ingredient to be administered to babies. Karo syrup is a commercial corn syrup derived from the starch of maize.” 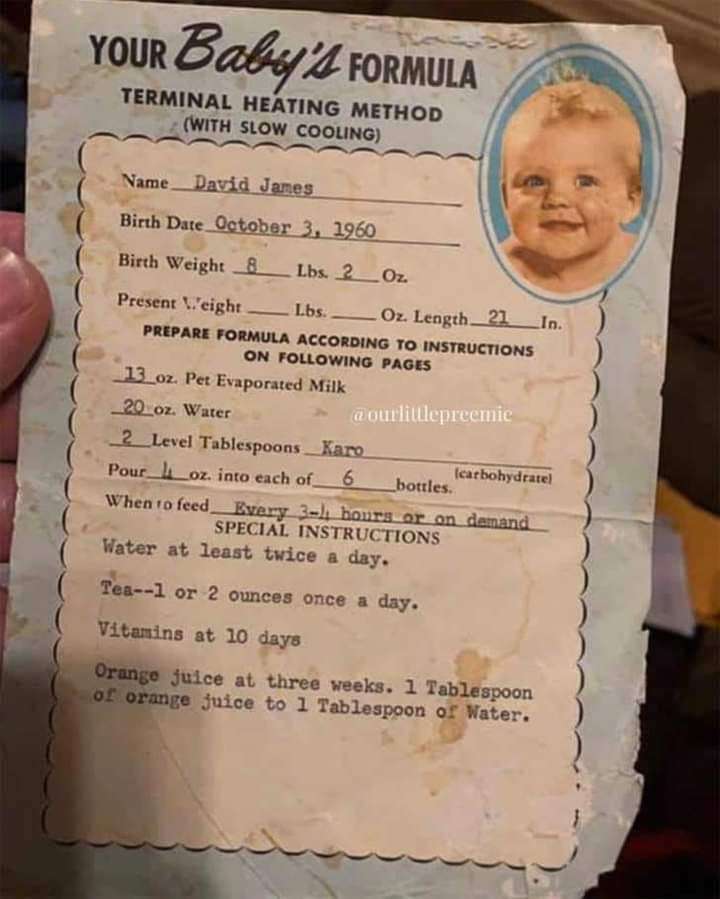 The article also notes that the U.S. Food and Drug Administration (FDA) doesn’t recommend making homemade baby formula “because the homemade formula recipes are not evaluated by governing authorities.”

I’m not saying it’s a good idea to give babies corn syrup. But many commercial formula brands are still made with corn syrup solids. The 1960 recipe might not be the most nutritious, but it’s not like it’s recommending feeding your baby bleach. And many people still make homemade baby formula, even if the FDA doesn’t approve of it.

People might be especially interested in homemade formula right now, considering the formula shortage (which is partially driven by the FDA). It’s amazing that the FDA is objecting to recipes that haven’t been evaluated by bureaucrats, and it’s obnoxious that Facebook has decided to hide this information. Even if the 1960 recipe isn’t up to snuff, it could get people sharing information about better and more up-to-date recipes for homemade formula. Of course, those might not meet Facebook and FDA standards either…

• The Army has a terrifying new recruitment ad. The Army Times sums up its message as “join Army PSYOPS to find, manipulate and become the ghost puppeteer pulling the world’s strings, especially those of hot-button national security threats like the Chinese and Russian governments.”

• “America’s public schools have lost at least 1.2 million students since 2020,” reports The New York Times. And “state enrollment figures show no sign of a rebound to the previous national levels any time soon.”

• Will Republicans screw up the school choice moment? “Republicans are in danger of squandering a promising opportunity for education reform on culture war squabbles,” writes Robby Soave in Reason‘s June issue.

• Instead of ending policies that contribute to America’s baby formula shortage, Democrats want to give the FDA $28 million to study the marketplace and do more inspections.

• The Week is ending its opinion articles.