Video: Father Forcibly Thrown Out Of School Board Meeting For Not Wearing Mask – Board Members Were Caught Doing The Same Days Earlier A father attending a school board meeting in upstate New York was forcefully dragged out of the room by what appears to be private security after declining to wear a mask, just days after board members were photographed maskless at an indoor event.

The New York Post reports that Dave Calus sat maskless at the Webster Central School District Board of Education meeting for about 15 to 20 minutes waiting patiently to voice his opposition to mask mandates for children when a security guard approached him.

The guard asked him twice to put a face mask on, to which Calus declined.

Security then became a little more insistent on the third try stating, “You need to wear a mask.”

After declining yet again, the guard grabbed Calus’ chair and pulled him backwards towards the exit.

As the father leaned forward, the officer can be seen grabbing him by the jacket, yanking it completely off of him, before he is forcibly shoved up against, and then through the door.

Private Security team ASSAULTS a tax paying citizen for the Webster, NY school district at a Board of Ed meeting. Police stand by and WATCH. Absolutely insane. pic.twitter.com/qWbbQ1iSxn

Security Throws Father Out of School Board Meeting

Calus, whose son attends a school in the district, told Spectrum News that he was aware of the mask requirements inside the building, but as he was there to protest masking children he felt he had to make a point.

“Should I have worn a mask?” Calus said. “Maybe, but if I’m there advocating on behalf of my child, you know, to go to school mask-free while I’m wearing a mask, that’s really not going to carry a lot of weight, right?”

The Webster Police Department, which had resource officers on sight, says they are investigating the incident and will determine whether charges are appropriate.

The @WCSDProud security guard in this video needs to be arrested and charged with assault.

The police officer in this video needs to turn in his badge.

A lawyer representing Calus says the father was simply seeking to express his concern over the “ridiculous mandates.”

.@WCSDProud could you please explain the legal authority which permits your agent to put his hands on this man? https://t.co/jAYUFEq7LA

Board Members Were Indoors Without a Mask Days Earlier

Outrage on social media was plentiful but reached a boiling point when photos surfaced from an event days earlier showing multiple Webster CSD board members attending an indoor event and not wearing masks.

A picture tweeted by New York State Assemblymember Jen Lunsford shows her alongside several unmasked board members at a legislative breakfast. 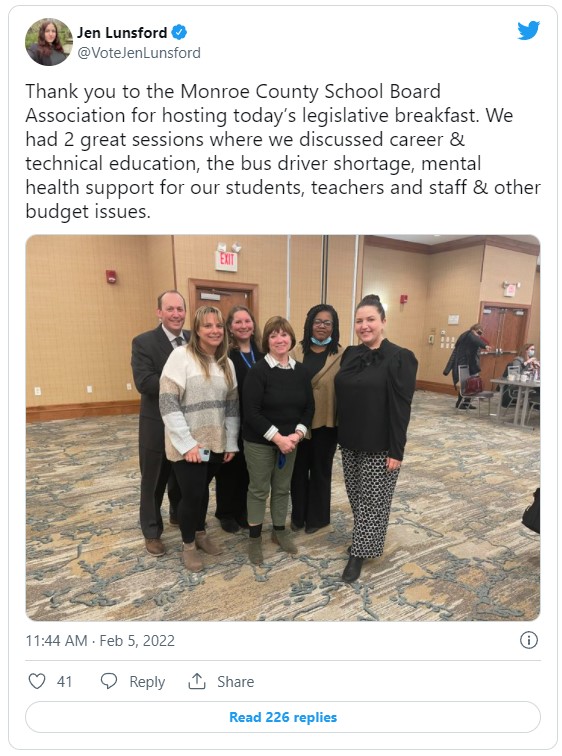 The mask mandate for indoor settings was not officially lifted in New York until February 10th.

After Lunsford received criticism for the apparent hypocrisy, she offered an explanation as to why the maskless photo was not an issue.

“We took off our masks for 30 seconds while the photo was taken. You can see other masked individuals in the background,” she replied.

Did she also hold her breath like Los Angeles Mayor Garcetti, who used the same excuse?

The lawyer for the father who was thrown out of a school board meeting for not wearing a mask expressed skepticism over Lunsford’s explanation.

“Even if that’s true, which it certainly is not, they were there for two or three hours,” he said. “But, even if what she says is true, that it’s 30 seconds, why does she get to make that judgment call? Because she thinks she knows better than everyone else, right?”

“These people are such hypocrites,” he added.

A statement by the school district places blame on Calus for not acting in a “civil manner.”

“We strive to hold board of education meetings in public in order to inform the community of activities going on in our schools,” they said. “Those meetings can only occur when everyone in attendance acts in a civil manner.”